A Day Out at Scone Palace

Poised above the River Tay in Perthshire, Scone Palace overlooks the routes north to the Highlands, and east through Strathmore to the coast. The Grampian mountains form a distant backdrop, and across the river stands the city of Perth.

The Scone Palace Garden Fair on 3rd and 4th of June, is set to welcome visitors from across the country who are interested in gardening but also enjoy shopping, eating out, and bringing the family together for a memorable day out in the grounds of one of the most popular tourist attractions in both Perth and Scotland.

Historical Importance
There can be few places of interest in Scotland as historically potent as Scone Palace. When you visit the Palace you are walking in the footsteps of Scotland’s ancient founding fathers, both pagan and Christian. It was an important religious gathering place of the Picts, it was the site of an early Christian Church, and it housed the Stone of Destiny.

From the time of Kenneth MacAlpin, who created the Kingdom of Scone in the 9th century, all the Kings of Scots were crowned on the Moot Hill, seated upon the Stone of Scone.

Probably the greatest historic event to take place at Scone was the coronation of Robert the Bruce, who declared himself King of Scots upon Moot Hill on 25th March 1306.

The place of coronation was called Caislean Credi, ‘Hill of Credulity’, which survives as the present Moot Hill. Even after the Stone’s removal by King Edward I in 1296, Moot Hill continued to be the crowning place of the Kings of Scots. The last coronation was of Charles II when he accepted the Scottish crown in 1651.

Standing on the Moot Hill is a small Presbyterian chapel. Like the Palace, it was restored in Gothic style around 1804. A replica of the Stone of Scone sits upon the Moot Hill, marking the site of the original.

There are still many reminders of Scone’s past around the grounds. From the Mercat Cross (Market Cross) and Old Scone graveyard to the 16th-century archway which was the grand entrance to the ‘City of Scone’.

Palace Grounds
A visit to Scone Palace would be incomplete without enjoying the wider estate and Palace grounds whichs cover more than 100 glorious acres.

Ticket entry to Scone Palace Garden Fair will allow you to enjoy the Fair and to tour the grounds and see the Victorian pinetum, the Murray Star Maze, the walled garden restoration project, and the kitchen garden, making it a perfect day out for all the family!

David Douglas and the Pinetum
Born in the village of Scone in 1799, David Douglas is considered one of the greatest plant hunters of the 19th century. He worked as a gardener at Scone Palace for seven years before moving on to become an explorer and a great plant hunter.

Stroll at your leisure through the magnificent Pinetum where, amongst others, giant redwoods and Noble Firs tower over you, then move on to the New Pinetum of less hardy and decorative conifers.

Botanical Highlights
Whilst the gardens and grounds are beautiful throughout the year, there are a number of seasonal highlights. Early spring is heralded by the arrival of snowdrops followed by the drifts of daffodils throughout the grounds. The primulas and bluebells bloom in the woodland areas throughout April and May. In May and June, the grounds explode with colour from the rhododendrons and azaleas, while the Laburnum Walkway will also dazzle you with its distinctive bright yellow flowers.

The Murray Star Maze
The maze is planted in a mixture of over 2000 copper and green beech trees, designed to resemble the Earl of Mansfield’s family tartan, Ancient Murray of Tullibardine, and is in the shape of a five-pointed star which is part the family’s emblem. Designed by international maze designer Adrian Fisher, the maze was planted in 1991 and covers an area of 1600 square metres.

The bridge over the entrance is based on a design from the Glasgow Garden Festival in 1988 and is made of timber from the Scone Estate.

The Kitchen Garden
Reinstated in 2014, the Kitchen Garden offers visitors the opportunity to view the gardens where produce is grown for the Palace kitchens and pathways have been made through the various vegetable and cut flower beds for visitors’ enjoyment.

Nature at Scone
The grounds and open gardens at Scone Palace are home to a variety of wildlife. The red squirrel is attracted to the great woodlands, as are roe deer. The estate grounds provide a sanctuary for birdwatchers with oystercatchers, swallows, and the rare hawfinch frequent visitors.

On a warm, sunny day look out for an array of butterflies in the colourful Butterfly Garden and of course, do look out for the peacocks who roam freely around the Palace grounds! 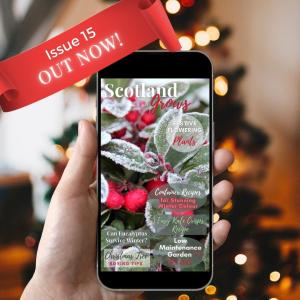 We are beyond delighted to welcome Eli Appleby-Donald of @inthegardenwitheliandkate to Scotland Grows a new columnist!
It might not feel like it right now, but spring is most definitely around the corner, and the next issue of Scotland Grows, out one week today, on 3rd February, will get you right in the mood for springtime!
Be part of something positive this weekend and take part in the Big Garden Birdwatch!
It's time to celebrate the Bard and his love of nature today!