Iconic the world over, and growing throughout Scotland like a weed, the handsome Scottish thistle with its globe shaped, purple flower is said to be the oldest national flower on record.

The legend of how this proud and regal weed became our national emblem goes back many hundreds of years, to the time when Scotland was being rampaged by the Vikings. The story is told that a Viking party planned to creep under the cover of darkness to ambush a sleeping party of Scots warriors. Fortunately, one of the barefoot Vikings crept onto a spiky thistle and his painful cries woke the sleeping Scotsmen who then charged into battle and emerged victorious. The thistle was apparently adopted as a national emblem because of the heroic role the plant played in the outcome of the battle.

The thistle has been the recorded national emblem of Scotland since the reign of King Alexander III (1249–1286). It is found in many Scottish symbols and was used on silver coins issued by King James III in 1474, the first coins to feature a thistle.

Mary Queen of Scots (1542-1587) had the thistle’s image incorporated into the Great Seal of Scotland, making it a national symbol for longevity and early in the 16th century, it became an integral part of Scotland’s Coat of Arms.

It may surprise you to know that Scotland is home to several varieties of thistle. The plant we know as the Scotch thistle, Onopordum acanthium, also known as the cotton thistle is not native and was most likely introduced from Europe pre-16th century. It was chosen by Sir Walter Scott (1771-1832) as the emblem for George IV’s visit to Scotland in 1822.

It has been accepted as a national emblem but the most likely candidate for the true Scottish thistle is the native spear thistle Cirsium vulgare, also known as the bull thistle, bank thistle or common thistle, which grows abundantly in Scotland and is very similar to the depictions on early Scottish coins. The name Cirsium is derived from the Greek word kirsos, meaning ‘swollen vein’, which refers to thistles being used as remedy against swollen veins.

Thistles are a biennial plant which means they take two years to complete their lifecycle. During the first year, the plant grows leaves, flowers during the second year, and then dies. They flower between July and September, producing sweet smelling, purple flowers on top of the spiky stalk.

The thistle is a large plant growing up to three metres tall and about a metre and a half wide, with leaves which can grow from 10 to 50 cm wide. In some rural areas it is known as living barbed wire due to the vicious, thorny spikes which cover it, making it a natural barrier for animals.

The freely self seeding nature of the the thistle is what allows it to colonise disturbed ground, waste places and roadside verges easily. The this plant has a very stubborn and invasive taproot system and removing unwanted thistle plants is not an easy task.

On the plus side, the flowers of Cirsium vulgare are an attractive source of nectar and pollen loved by bumble bees, honey bees, hoverflies and butterflies.

Recognised as a symbol of Scotland throughout the world, this humble, prickly, purple thistle has been Scotland’s proud, national emblem for centuries. 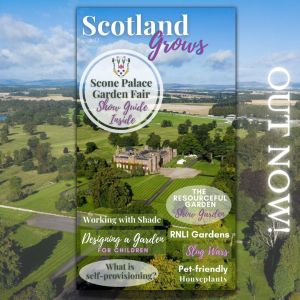 The next issue of Scotland Grows magazine is out on 5th August so do get in touch if you would like to see your information reach the hands of Scottish gardeners in our fully responsive digital magazine.
Do get in touch if you would like to see your garden featured in Scotland Grows magazine!
Get ready for summer with our Scotland Grows merch line with ladies and gents' t-shirts; long-sleeved shirts; sweatshirts and hoodies as well as mugs, water bottles and tote bags, and a cute kids' range to boot!
You may be struggling to water your plants as often or as much as you would like during spells of hot weather but do not despair as there are steps you can take to water more effectively in hot weather. Find our top 7 tips on our website to make the most of your watering time!